Thanks to Lunar New Year - which isn't even a holiday I've really been aware of in the past - we got three days off work this past week, and decided to take advantage of this fact to gad about in Seoul for a while. We took the bus early on Wednesday morning, arrived in Seoul three hours and fifty minutes later, and did quite a lot of things. This is going to be a long post, so get yourself ready.

The first thing we did, after dropping our stuff off at the hotel, was head to Craftworks Taphouse in Itaewon for lunch. The Taphouse had been recommended to us as a place which served draft ale, so Tom in particular was very keen. We were tired and hungry after the journey, and desperate for some interaction with native English speakers, so were completely unashamed to go there and eat cheeseburgers.

After a while, we decided to head for the Seoul Museum of History, accessible via Gwanghwamun subway station. On leaving the station, we saw this: 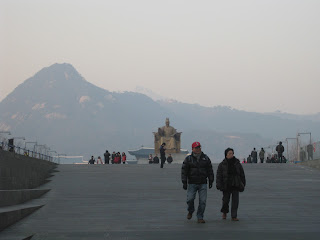 We headed a bit closer... 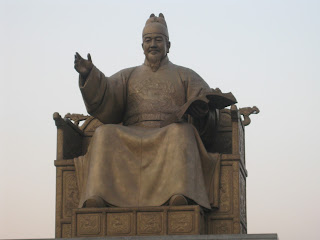 And found a statue of King Sejong, commonly called the "Great King." In the fifteenth century, he invented Hangul, the Korean alphabet, which is (in my experience, which involves Japanese, Chinese and now Korean) the easiest writing system in the Far East.

Behind this statue, doors were set into the plinth, and you could head into and under the statue to a museum all about Sejong. We found this by the front door: 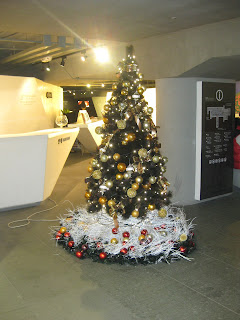 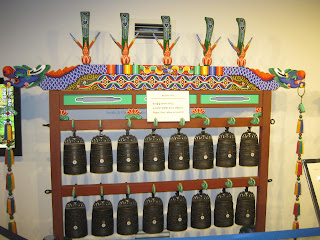 We saw a Korean musical instrument. 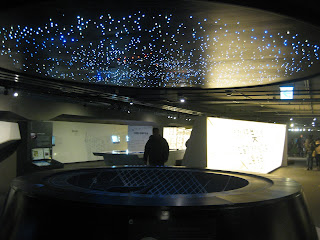 And this was an astronomical model of some sort. The fairy lights above were arranged in constellations, and you could press buttons to show which constellations were visible in which seasons. Below that was a large bowl decorated with drawings of gods and so on. 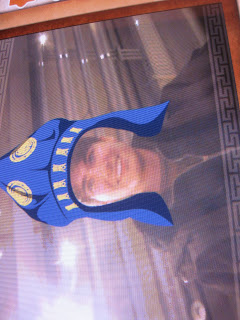 There was a camera machine. Tom enjoyed it. 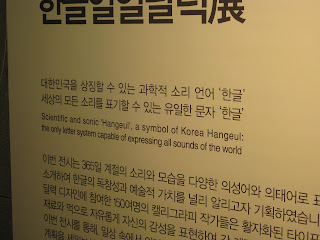 This says "Scientific and sonic 'Hangeul', a  symbol of Korea. Hangeul: the only letter system capable of expressing all sounds of the world." To which I respond, "bollocks." (Yes, that's how strongly I feel about this issue.) "There's no F in Korean. My name is transliterated as "Peu-ren-che-seu-ka." Bloody liars. 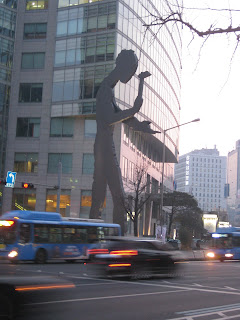 After a while wandering around the museum, we remembered our original goal and walked further down the road to the Seoul Museum of History. On the way, we saw a giant statue of a woman using some sort of hammer. I liked this very much. 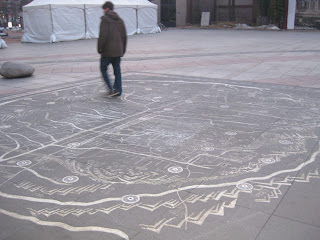 There was a map engraved on the ground in front of the museum. 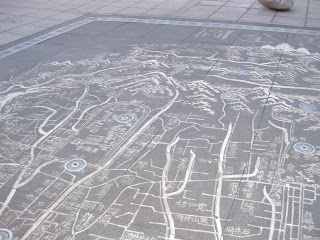 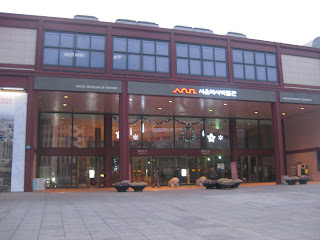 Unfortunately the museum was closed, so we headed over to Namsan Tower. You wouldn't believe it looking at this photo, but by this time it was getting quite dark, and I'd read that there was a light show at the tower every night and that Seoul from above, in the dark, was a view worth seeing.

We took the subway to the nearest station, and then followed the most ridiculous - and dangerous - directions to get to the cable car. Directions I'd printed off from a Seoul tourism website made us go along narrow roads with no pavement or lighting, and sent us teetering up steep slopes covered in snow, ice and water. (Although it was quite warm, especially on Wednesday and Thursday, it's clearly been freezing in Seoul for ages, and there were heaps of snow everywhere.) I was absolutely terrified, and by the time we'd been up and down Namsan and back to the train station, neither of us could stop our legs from shaking.

Turns out that I don't like cable cars. There were at least twenty people crammed into a tiny box with no seats, which happened to be dangling from a washing line as it ascended a mountain. All I could think was "this is what horror movies are made of."

At the top of Namsan Mountain, we sat for a while - I calmed down and psyched myself up for the journey back - and took some pictures. 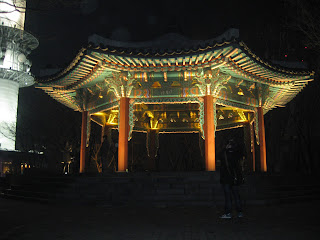 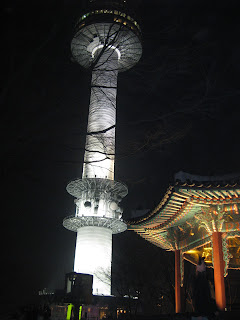 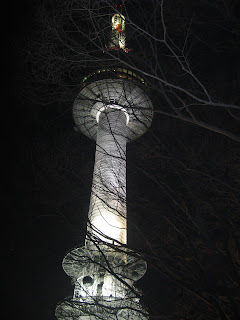 The light show was cancelled due to the cold, oddly, so we took a picture of Seoul-by-night - kind of foggy - and went back down. 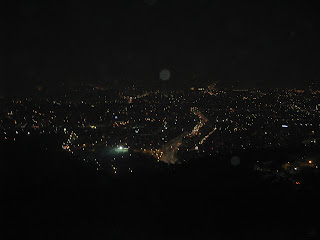 And then we went back to Itaewon and had Taco Bell for dinner. It's shameful, I know.